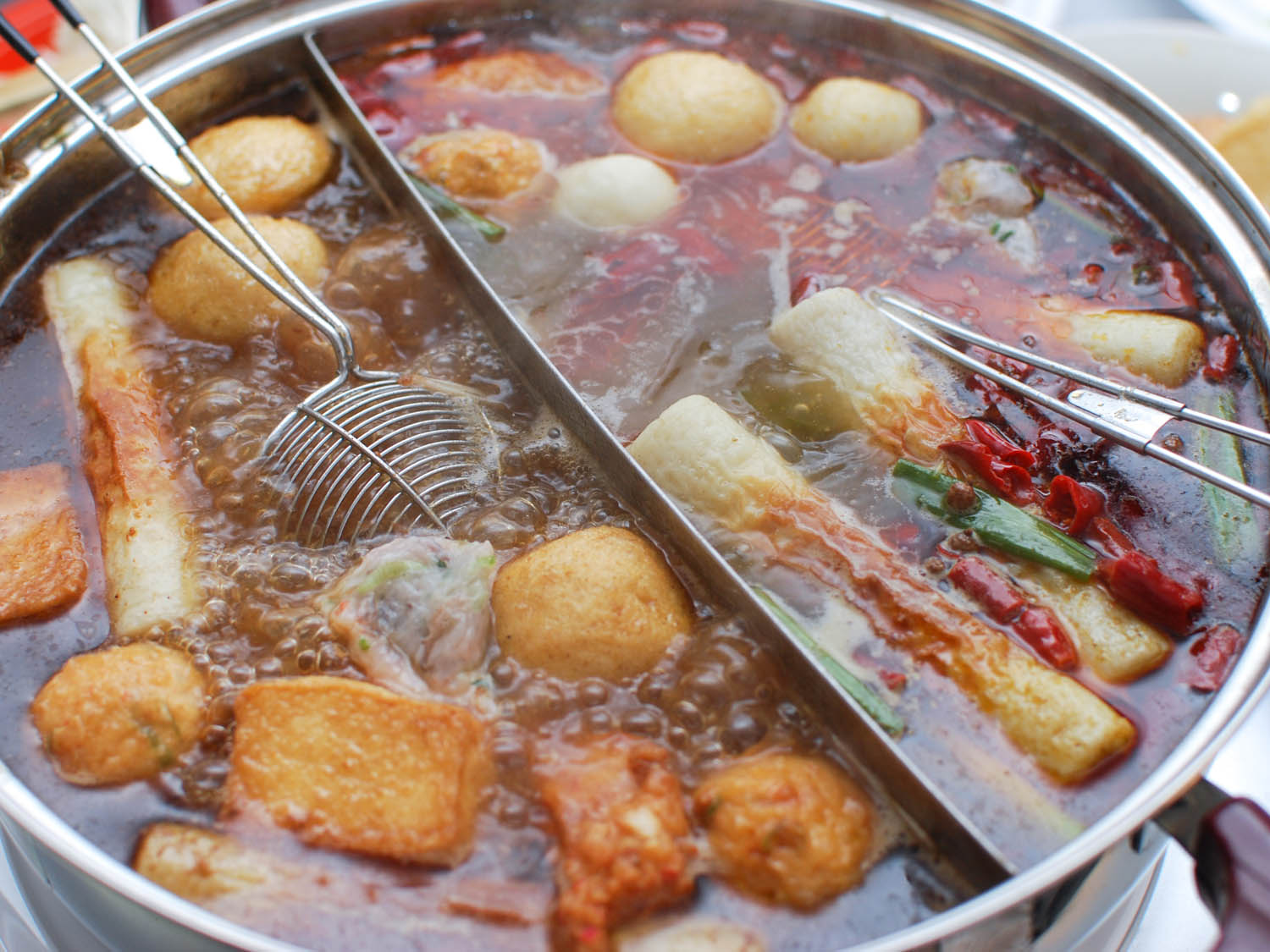 For me, cold and windy weather means one thing: It’s hot pot season. The concept of hot pot is simple. You set a pot of simmering broth on a portable burner in the middle of the table. Around it are plates of meat, seafood, and vegetables, all prepped and ready to be cooked in the broth.

There are different styles of hot pot around Asia, and even within a given country, each household will do it a little differently, but if there’s one universal hot pot rule, it would be this —you don’t “hot pot” with people you don’t like. Like fondue, hot pot is one of the most social of dining formats. Not only are you gathered at one table sharing a meal, but you’re cooking your food together in a shared pot. 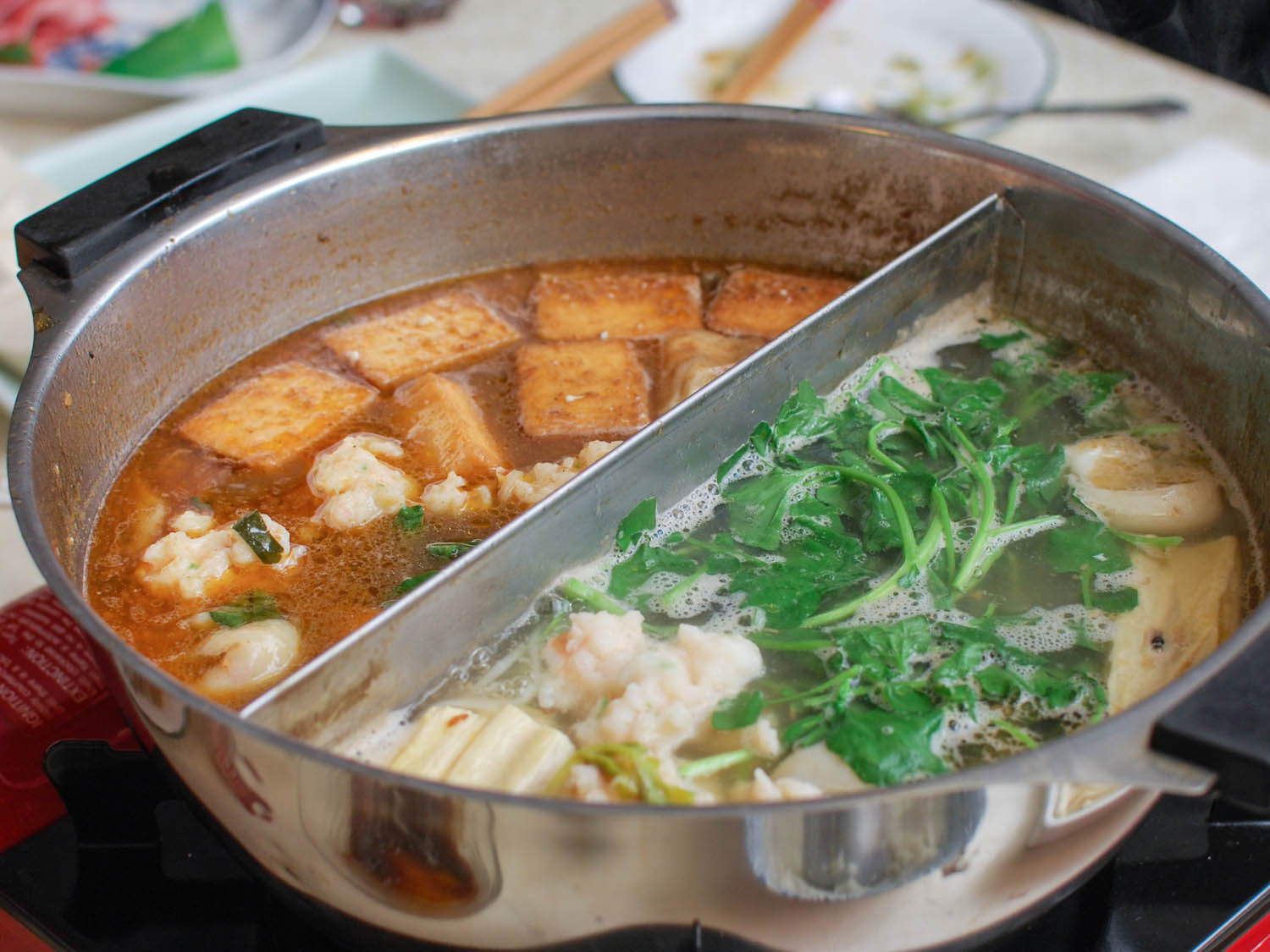 There are many regional versions of hot pot throughout China. What makes one different from another is the broth and the specific meats used. In colder Northern China, lamb is a common choice. Cantonese hot pot, on the other hand, is heavy on fresh seafood, including live shrimp, oysters, and squid. Mongolian-style hot pot is known for its flavorful broth, which contains ingredients like goji berries, jujubes, and a mix of herbs. The city of Chongqing is famous for its use of Sichuan peppercorns and other mouth-numbing ingredients. (And that’s just China—there’s a whole world of other hot pot traditions, like Japan’s shabu-shabu, Thailand’s Thai suki, and more.)

To make a hot pot feast at home requires little more than some planning and prep work. First, let’s go over the equipment you need, then look at the ingredients (meat, seafood, vegetables, etc.) and how to prep them for hot pot. Next, we’ll cover the different kinds of broth you can choose, as well as the sauces to serve alongside. At the end, we’ll go over table setting and the basics of hot pot etiquette. In order to hot pot, you need a pot and a burner to keep things simmering at the table. There are a variety of pots and portable burners you can choose. Electric and induction hot-pot sets are the easiest to clean up: you simply wipe the top surface clean with a towel. But one of my favorite ways to make hot pot is with a portable butane burner. It’s a little harder to clean, but I like the fine-tuned heat control it offers, which makes maintaining a simmer incredibly easy. Butane burners don’t often come with a pot included, so you’ll need to buy that separately, and you’ll need to replace the fuel every few hot pot sessions.

No matter which hot pot setup you end up with, look for a pot that has a separator in the middle for accommodating two broths in one pot, to get the most broth mileage out of one burner. A single pot, about 12 inches in diameter, can serve anywhere from 2 to 6 people; feeding a larger crowd will require a second pot and burner. Other than that, all you need are some basic accessories: chopsticks (different sets for dipping in the communal pot and eating), mini tongs, small strainers, spoons, shallow bowls for eating, and small bowls for dipping sauces. The list of foods that can be cooked in a hot pot is a long one. Variety is key, since you want to have a little bit of everything. Beef and seafood are two of the most popular foods to cook in a hot pot, but you’ll need to balance those more filling items with light ones like greens and other vegetables. For example, for a four-person hot pot, I like to have at least two types of greens; three to four non-meat items like tofu, mushrooms and daikon; two to four meat items such as liver, beef, chicken, and tripe; two to four different kinds of seafood such as fish balls, salmon, and shrimp; and some kind of noodle: rice noodles, udon noodles or yam noodles.

Here’s how to prep some of my favorite ingredients. 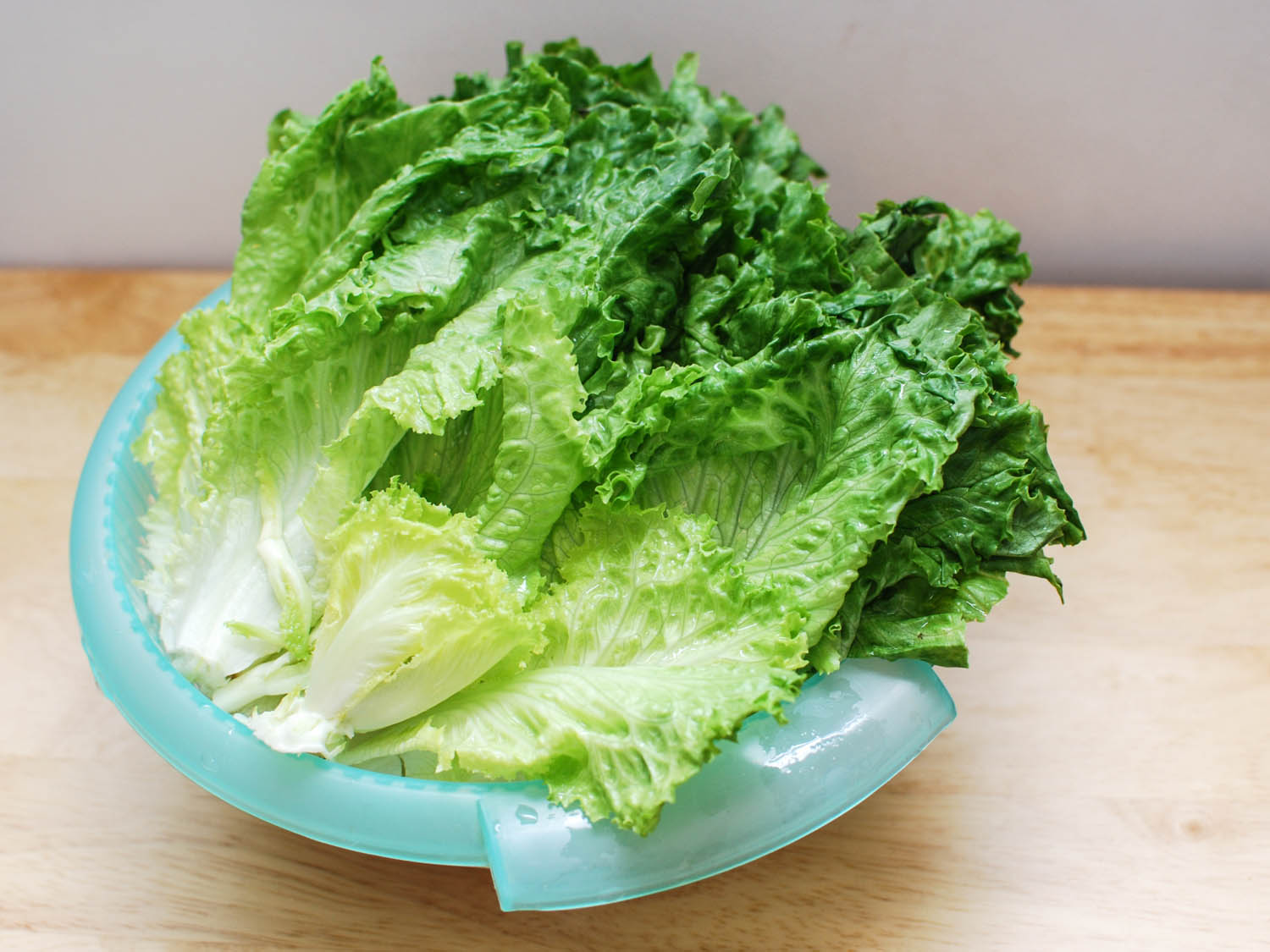 Meat and seafood may be the centerpieces of a hot pot meal, but the feast isn’t complete without vegetables. They balance out the heavier offerings and add flavor to the broth. You can add almost any vegetable to a hot pot, but I prefer ones that retain a little bit of texture even after cooking in the broth. 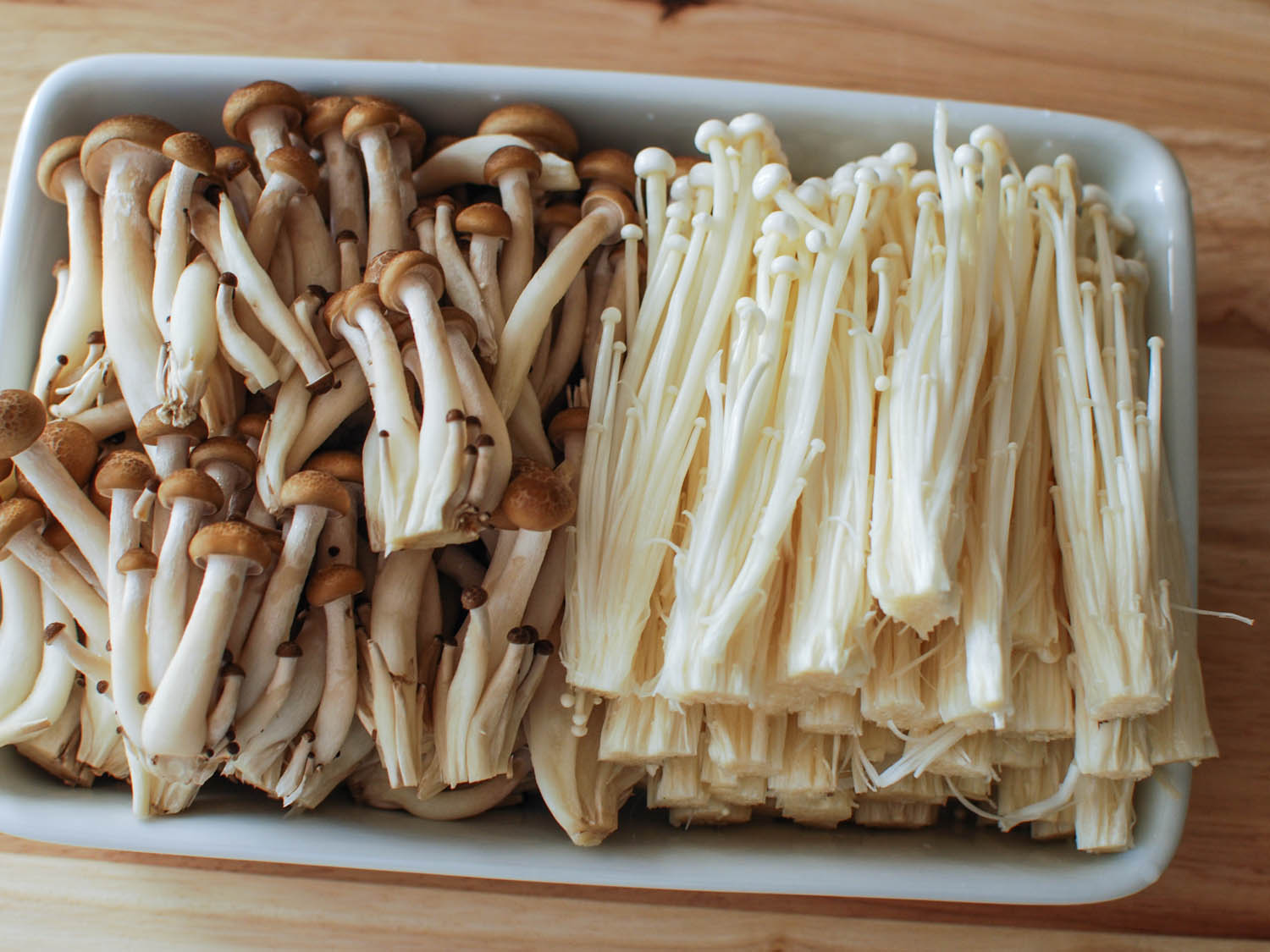 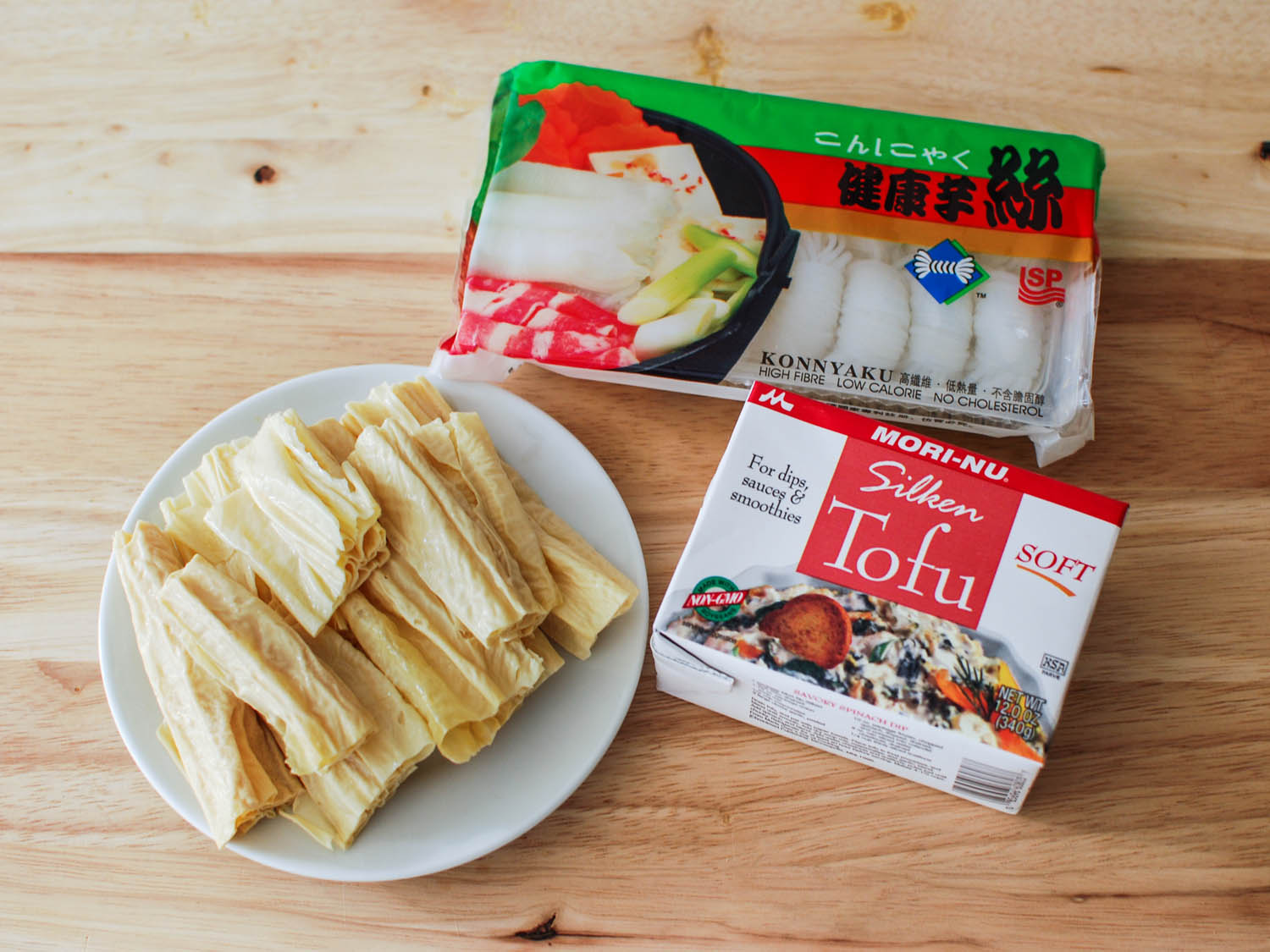 Just about any meat is hot-pot-appropriate meat. Beef, pork, and lamb are best prepped as paper-thin slices. Dip them a few times in the hot pot broth and in a few seconds they are done. Unless you have a meat slicer at home, buying it pre-sliced is the way to go; you can find packages of thin pre-sliced meats in the freezer section of most Asian supermarkets. Just remember to thaw the meat before it’s time to sit down to eat. If you’re not able to find thin slices of meat, slice them as you would if you were prepping for a stir-fry. 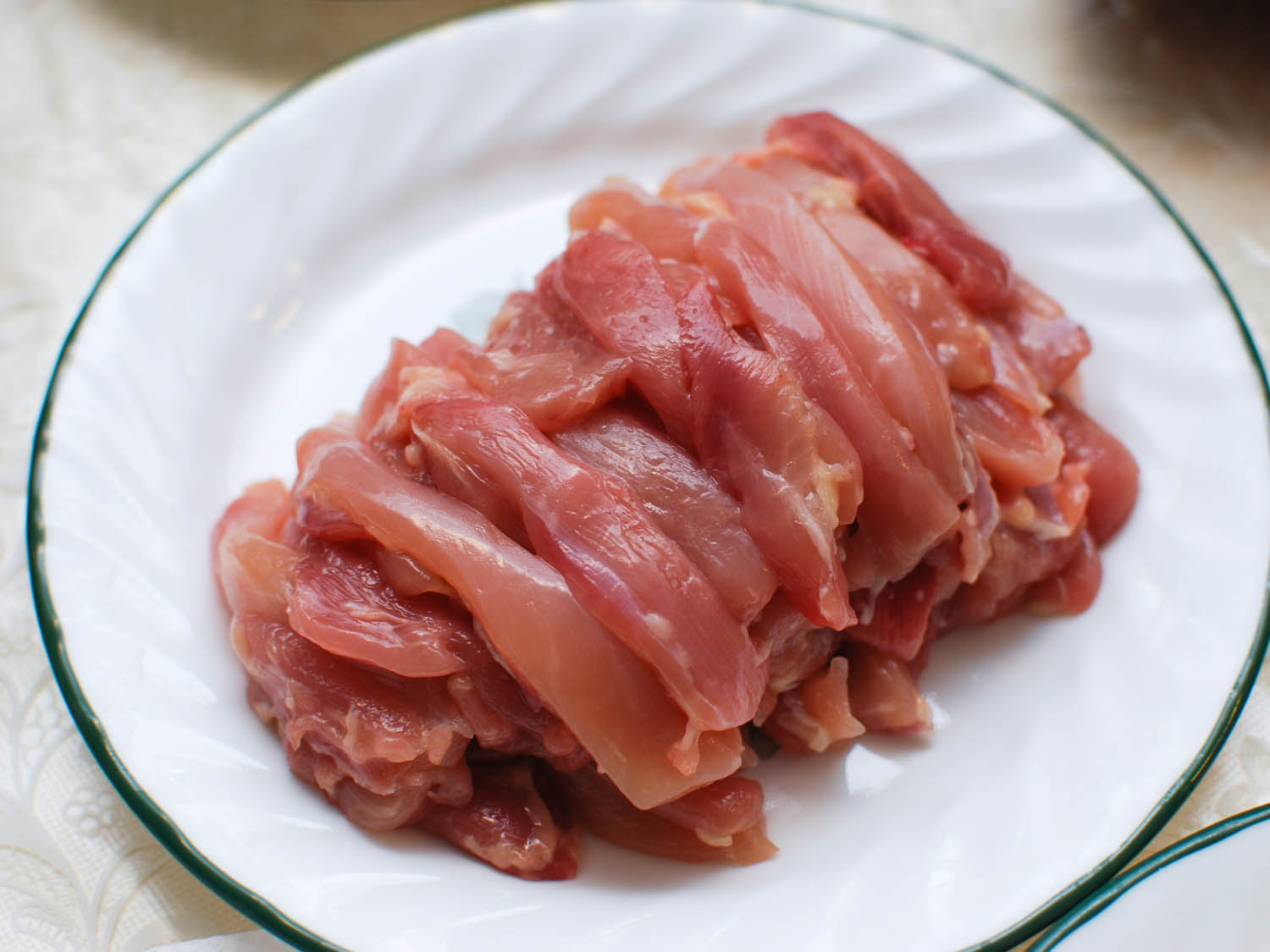 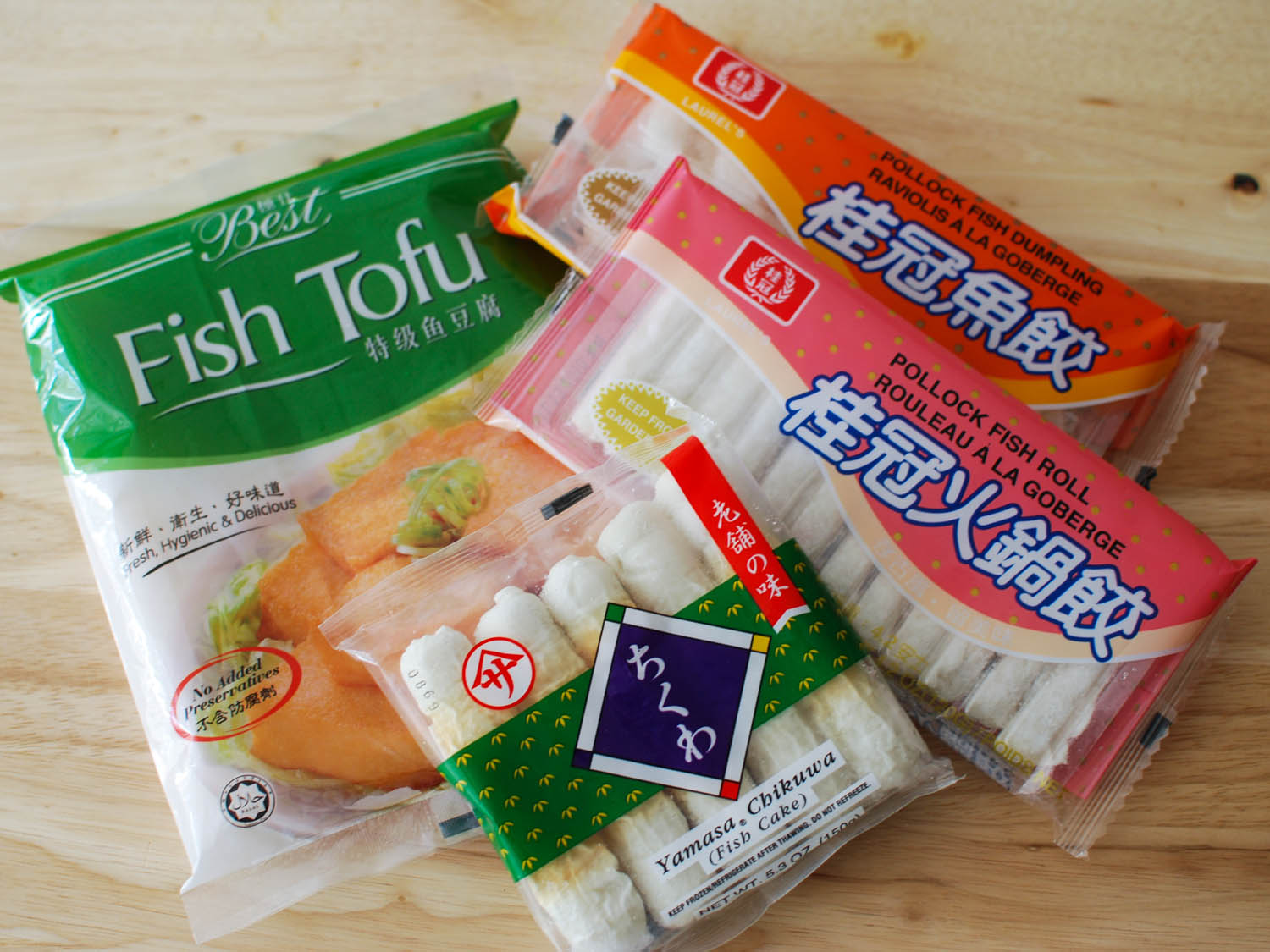 Just like meat, the variety of seafood you can cook in a hot pot is endless. Here are a few ingredients to consider, plus tips on prepping fresh seafood as well as fish balls and fish cakes. Vegetables, meat, and seafood are great in a hot pot, but what about the carbs? You can have white rice, but noodles are the more popular choice. There are lots of options, including ho fun (wide white noodles), needle noodles (transparent and shaped like thick needles), and rice-stick noodles (also known as banh pho or fresh pho noodles). Fresh noodles generally take under a minute to cook. Dried rice noodles, such as vermicelli noodles, on the other hand, are best boiled in water first, then rinsed with cold water, drained, and served in a bowl alongside the other hot pot ingredients; to serve, I just set a few strands of noodles in my strainer, quickly dunk it in the broth to warm the noodles up a bit, and enjoy. Another option are yam noodles (such as shirataki noodles), which take seconds to cook and require only a quick dip in the broth. 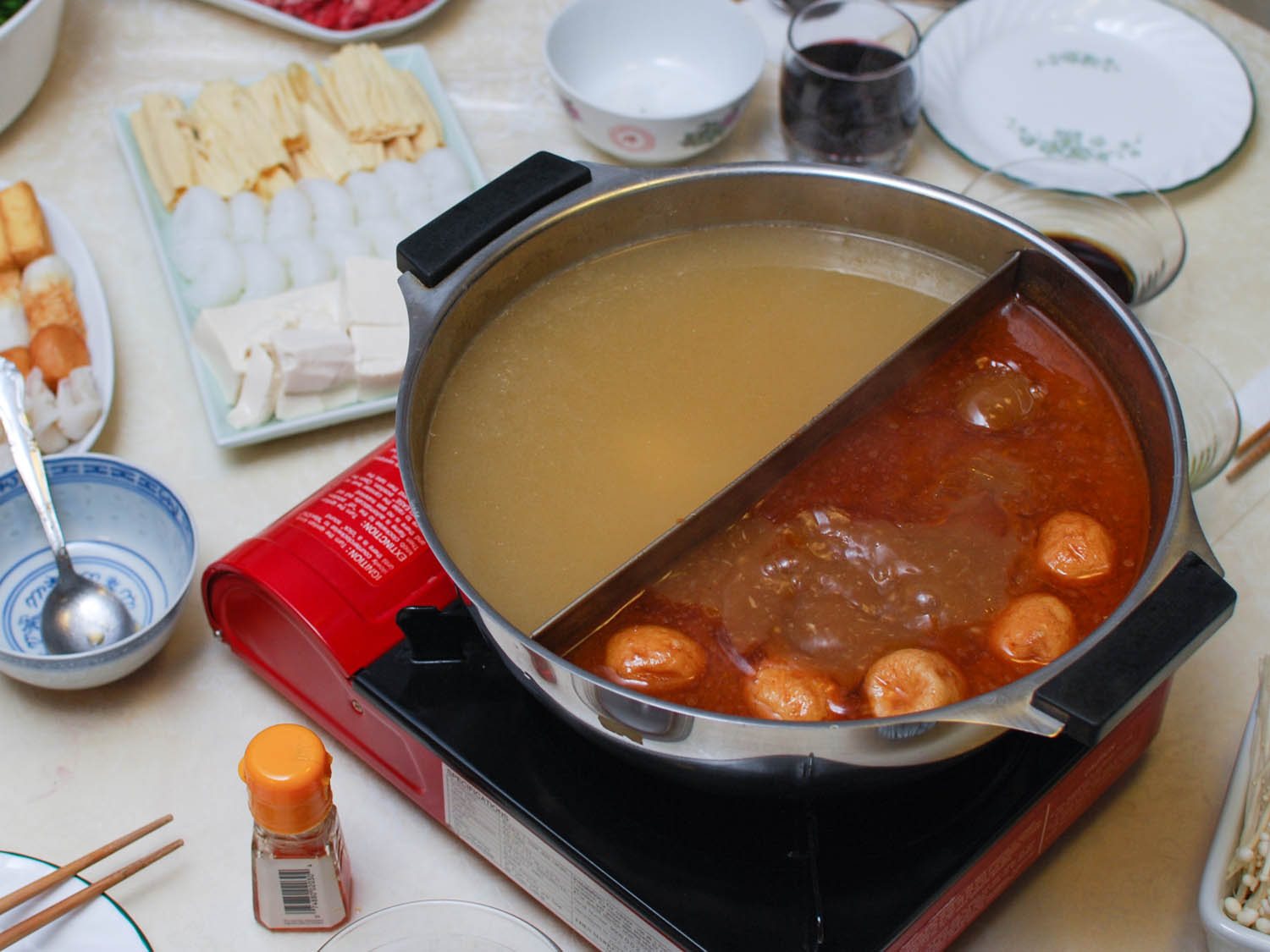 With the dipping ingredients chosen, you next have to decide what kind of broth you want to cook them in. You can keep it simple and cook everything in chicken broth (homemade or store-bought) flavored with chunks of daikon, carrots, or corn, and a few slices of ginger. There are also packages of ready-to-use hot pot broth.

Two of my favorite brands are Lee Kum Kee and Little Sheep. If you want a broth that’s mouth numbingly spicy, Little Sheep’s Mongolian hot pot broth (the one in the red package) is the way to go. For something mild, I like Lee Kum Kee’s Seafood Hot Pot base, which is good for non-seafood ingredients as well. My all-time favorite hot broth is one that’s flavored with sacha sauce. Also known as Chinese barbecue sauce or satay sauce, sacha sauce resembles nothing like American-style barbecue sauce or the Southeast Asian peanut-based sauce we usually associate with satay. It’s made with soybean oil, garlic, chilies, dried shrimp, and brill fish. The most popular brand is BullHead, which is a tiny bit sour and comes in spicy version and non-spicy versions.

Before you start feasting on your hot pot feast, you can’t forget about the dipping sauces. Just like the broth, there are many options. To keep it simple, I like to make a quick one by combing soy sauce with a drizzle of sesame oil and a touch of chili oil or chili flakes. You can also add chopped cilantro and/or scallions, or even fresh bird’s eye chili pepper to it.

Another popular simple dipping sauce is egg yolk: just separate the yolk from a very fresh egg, stir it, and that’s the dipping sauce (obviously avoid this if you have salmonella concerns). The yolk is especially good with meat like fatty beef and lamb. Other good dipping sauces to have on hand are a ginger-scallion sauce (great with seafood and vegetables) and a scallion-and-hot pepper sauce (perfect for noodles and meat). I’ve got all the recipes for you, don’t worry.

Using separate plates for each of your ingredients might look pretty, but in a small space it’s just not practical. Ingredients that are in the same category, such as meat ingredients like fatty beef and lamb, or seafood items like fish balls and fish cakes, can all be placed together on one big plate. Also remember that you don’t need to put out all the ingredients at once: Fish balls, for instance, can be simmered from frozen, so it’s best to put just a few out at a time, keeping the rest in the freezer and replenishing as needed. The same goes for other seafood ingredients like shrimp, fish, and squid: keep some of it the fridge, topping up the plates as they run low. 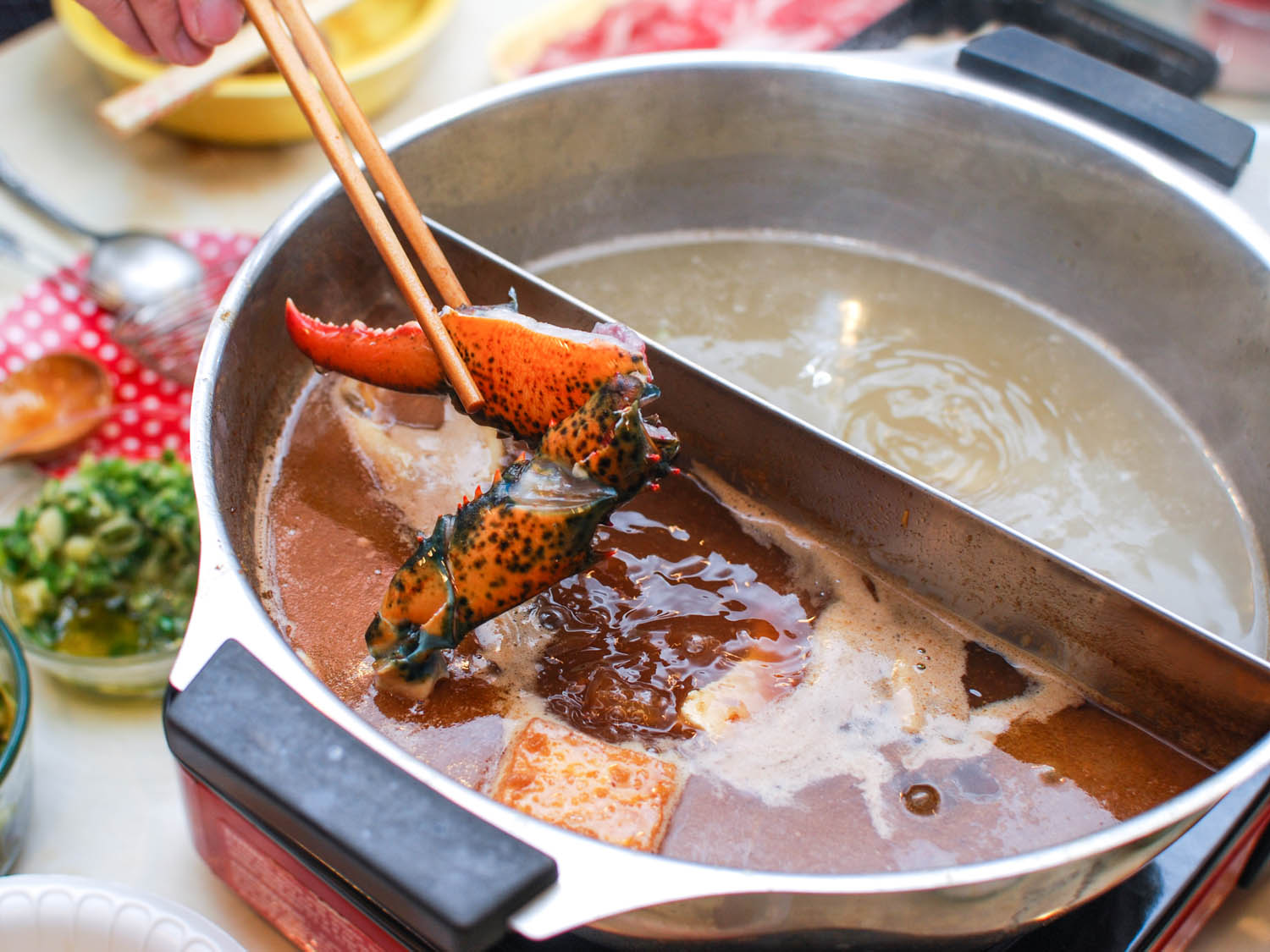 Before the first fish ball hits the pot, here are a few hot pot rules: 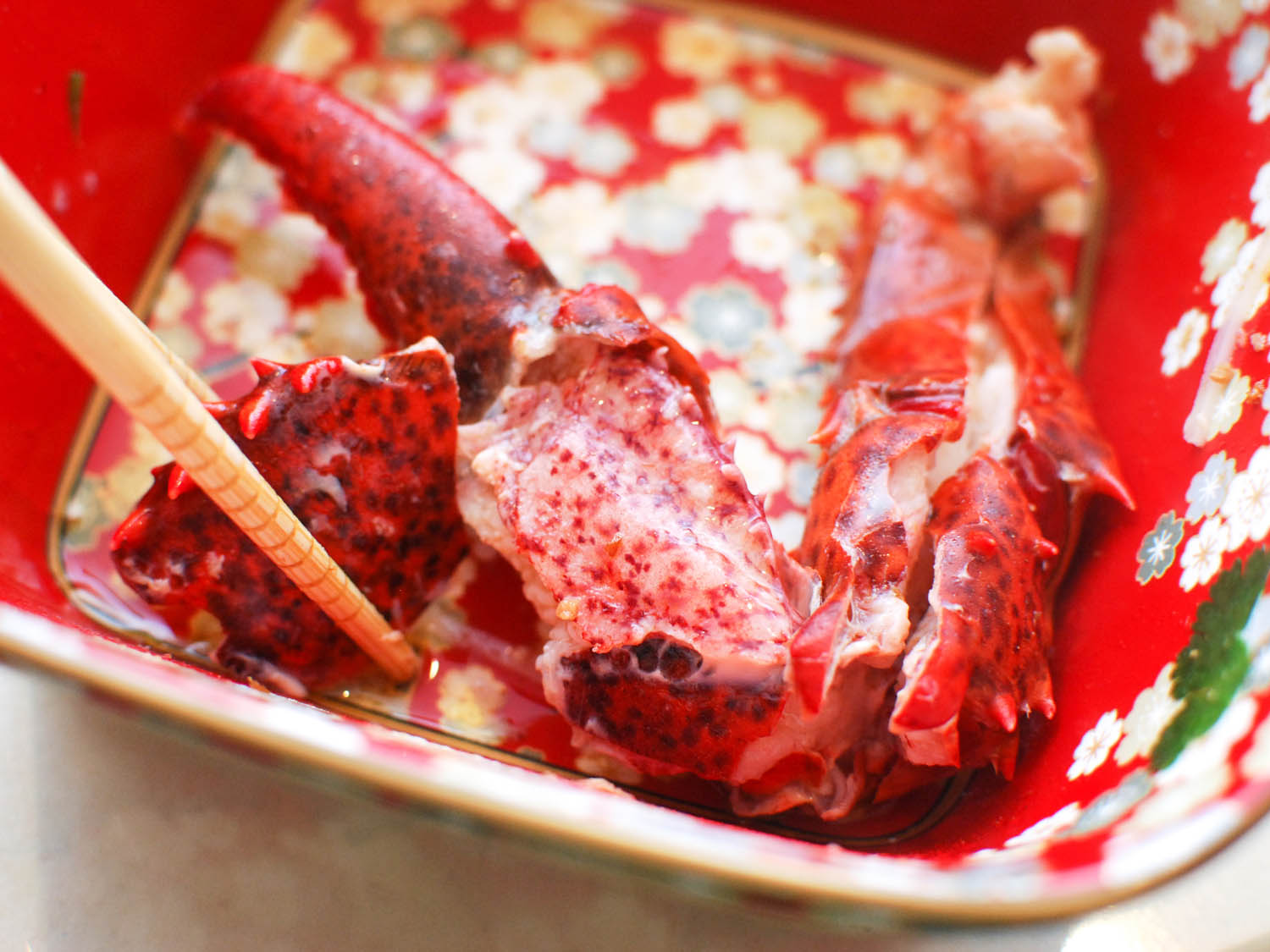 And there you have it, everything you need to know to get started with Chinese hot pot at home.